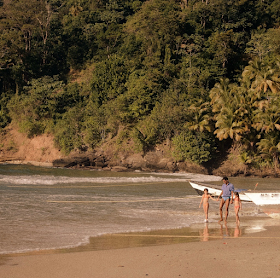 FATHER-daughter relations, the politics of being an artist, and poetry of breath-taking power converge in Unfinished Sentences, Mariel Brown’s moving new work about her late father, the acclaimed poet, writer and newspaper columnist Wayne Brown.

Minutes into the film premiere last Thursday at CineLit – the film segment of the NGC Bocas Lit Fest – it became clear this was not a feature film dramatizing Wayne Brown’s life. Nor was it a documentary in the conventional sense. Rather, the daughter has done something more fitting. She has made a fine example of that genre of art called the film-poem.

Unfinished Sentences, therefore, is not strictly about the life of Wayne Brown. His daughter’s grief and depression, her struggles within this region’s precarious creative arts sector, as well as the story of her father’s momentary rejection of her because of a haircut all find a place in this meditation. Equally, the effective use of archive footage in relation to historic events surrounding the family narrative, gives a wider context. We get a glimpse of the politics of race relations and of life in Caribbean countries as they straddled the transition from colonialism to independence. The result is something similar to the personal and political meditations in The Amerindians, the 2010 film by Tracy Assing.

But every poem, whether written on the page or presented to us on a screen, is an act of anamnesis. And the strongest aspect of the film is how it breathes life into Wayne Brown’s words, starting with his astonishing poem, ‘Voyages’ – the title poem from his 1989 collection. The poem interrogates language, history, and the idea of the human body as apparition. Says the poet: “The poem dies, / the cry of the slaveship under waves / dies and resurfaces”. As the film unfurls, Wayne Brown’s lines come to dramatize aspects of his life, as if arguing a case for the notion that an artist’s private life always finds expression in her work.

With the aid of Nadia Huggins and Sean Edghill, who serve as the film’s directors of photography, Mariel Brown also successfully creates a distinctive look for the work, embracing techniques and filters that evoke the Polaroids and grainy film textures of a bygone era. Visual artist Huggin’s underwater footage, in particular, is striking. As is the voicing of actor Nickolai Salcedo, who eerily achieves Wayne Brown’s timbres. Additionally, composer Francesco Emmanuel and editor Laura Fong-Prosper weave the film’s disparate strands expertly.

But the real star is the written word. Those going into this film wanting to know as much as possible about Wayne Brown’s work, its reception during his lifetime and since, and how it fits within wider literary currents, may be dismayed by the wide focus. Equally, those who are not driven to ecstasy by poetry and letter-writing will find relief in the focus on universal themes like family quarrels, romance, race and love. The incident in which the writer says his daughter’s haircut makes her look like an “ugly dyke” raises troubling questions about his attitudes to LGBTQ rights and, therefore, his legacy. But such questions are not taken up.

While the film sometimes slips into the banal and lacks incisiveness in relation to the complexity of its prime subject, it does feature many candid, hilarious moments with Wayne Brown and the people who knew him best. The man, his loved ones and his words truly come to life.