FILM REVIEW: Poetry Is An Island 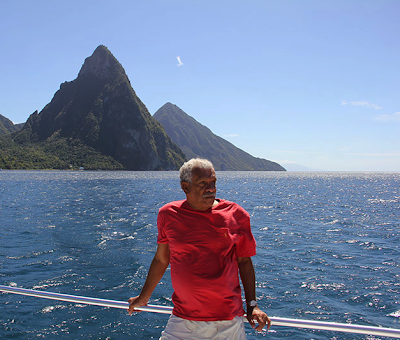 THE FIRST thing to be said of Poetry Is An Island, the fine new documentary about Derek Walcott which had its world premiere at the Trinidad and Tobago Film Festival (TTFF) last night, is that it is not a full-fledged biography of the great poet. Those seeking to learn about Walcott's entire life, his body of work and its reception at home and abroad, his literary influences and development, the arc of his career - and the attendant trials and tribulations he must have experienced along the way to the 1992 Nobel Prize in Literature, and since - will not find such here. Instead, this is a film which focuses on one particular aspect of Walcott: his life on the island of St Lucia, his birthplace. It is a psycho-geographic tour that is as unexpected as it is indispensable; the kind of gift you cannot imagine parting with even if you never realized you needed it in the first place. In a sense, Poetry Is An Island, gets down to the essence of things,  giving us an incredibly intimate portrait of the artist and examining an aspect of his life which, while relatively narrow in remit, finds the universal in the specific.

"I did not have the intention of making a biography film," said director Ida Does at the MovieTowne premiere last night. "I was fascinated with his connection with his island. I wanted to catch a bit of his poetry atmosphere. I aimed to get closer to him."

Walcott himself, who attended the premiere, told the crowd that the film reflected, "the continuous astonishment with St Lucia," a paraphrase of his own poetic line, "the perpetual ideal is astonishment."

That is not to say the documentary does not deal with biographical details of the poet and playwright's life. A key theme established is the central role of Walcott's father, Alix Walcott (a St Lucian public servant who died at the relatively young age of 31) in forging Walcott's own propulsion to write poetry.

"He wrote and I thought I would continue that in a sense," Walcott says in the film of his father. "My mother continuously spoke about my father and I found my father's work and my mother recited a lot." Of his own work, Walcott remarks, at one point, that poetry is the "language of love", not in a carnal sense, but "in the spiritual sense."

"That's what Larkin said. What will survive of us is love," he remarks.

The documentary does not go into detail about turbulent times in the poet's life, including the murk surrounding the campaign launched against him by a rival when he seemed poised to take up the post of Oxford Professor of Poetry. Though it is alluded to briefly, we also hear little about his relationship with VS Naipaul, a relationship as remarkable as it has been seemingly caustic on both sides (Walcott has sought to downplay the fallout between the two in recent years). By clear design, the documentary focuses on one country, St Lucia, and though it makes a detour to Trinidad to give us the Ramayana at Felicity, we do not get much else by way of Walcott's family in Trinidad and Tobago or aspects of his time at his Trinidad Theatre Workshop.

However, what we do hear and see amounts to a feast. Of particular note is the film's use of extensive  portions from Walcott's 1992 Nobel lecture - itself a fine essay later collected in his only publication of prose, What the Twilight Says - in which he sets out his audacious vision and roadmap for poetry and for post-colonial society. Incredibly beautiful footage of a re-enactment of the Ramayana at Felicity accompanies the audio of this lecture and forms the central spine of the documentary: giving it a form, structure and power that takes the feature into the realm of cinematic magic. We hear Walcott when he remarked at Oslo:

Felicity is a village in Trinidad on the edge of the Caroni plain, the wide central plain that still grows sugar and to which indentured cane cutters were brought after emancipation, so the small population of Felicity is East Indian, and on the afternoon that I visited it with friends from America, all the faces along its road were Indian, which, as I hope to show, was a moving, beautiful thing, because this Saturday afternoon Ramleela, the epic dramatization of the Hindu epic the Ramayana, was going to be performed, and the costumed actors from the village were assembling on a field strung with different-coloured flags, like a new gas station, and beautiful Indian boys in red and black were aiming arrows haphazardly into the afternoon light. Low blue mountains on the horizon, bright grass, clouds that would gather colour before the light went. Felicity! What a gentle Anglo-Saxon name for an epical memory...

Poetry, which is perfection's sweat but which must seem as fresh as the raindrops on a statue's brow, combines the natural and the marmoreal; it conjugates both tenses simultaneously: the past and the present, if the past is the sculpture and the present the beads of dew or rain on the forehead of the past. There is the buried language and there is the individual vocabulary, and the process of poetry is one of excavation and of self-discovery. Tonally the individual voice is a dialect; it shapes its own accent, its own vocabulary and melody in defiance of an imperial concept of language, the language of Ozymandias, libraries and dictionaries, law courts and critics, and churches, universities, political dogma, the diction of institutions. Poetry is an island that breaks away from the main.


These snippets alone are worth thinking about carefully and, in a sense, come to stand in for Walcott's poetry. They helped to assuage the disappointment of some members of the audience last night who argued that Poetry Is An Island does not present as much of Walcott's POETRY as one would like. True, we do not get any close textual analysis showing the uninitiated why Walcott is so great; showing how he fits (or does not fit) within a larger, international contemporary poetry scene; neither is his poetry examined in context of its treatment of the natural environment of St Lucia, which is itself a fascinating topic. For instance, his great poem, 'Sainte Lucie', is not presented here, a surprise given the film's focus on the island. We get some mention of Walcott's work ethic, but little discussion of his process as a whole in context of life in St Lucia and how that may have evolved over time. While some politics in relation to the neglect of the arts is included (somewhat didactically toward the end of the film) we do not get a more complex examination of the place of St Lucia amid the peregrinations of the author of The Prodigal. Other Walcott fans looking for their favorite Walcott poem - whichever one from among his massive output that may be - are not likely to find it.

That said, this is not Sunday School. And no documentary can contain all of Walcott's work nor can it say everything about a poet and his relationship with his birthplace. Poetry Is An Island opts, by clear choice, to present a kind of visual poetry instead. In this regard, it is a startling and moving achievement. Ida Does' use of imagery is simply magnificent, bearing the hallmarks of a born filmmaker. This is particularly so in relation to the scenes dealing with the Nobel lecture and Felicity and at some moments when the cameras themselves seem in love with the physical beauty of the island of Les Pitons.

And, in truth, the awesome poetry of the man is there. We get miraculous readings from Walcott of his work. Unforgettably, we hear him read 'Love After Love', as we see him, at age 83, walk around his garden. We also see the barbershop referred to in his great poem about Obama, from his most recent (and very fine) collection, White Egrets. He also breaks down in tears three times during filming while reading a poem about his mother. While we may quibble over what poems are in the documentary or not, these moments alone silence us and move us higher.

There are similarly moving scenes involving Walcott's childhood friends, including Dunstan St Omer and Arthur Jacobs. At one point, Walcott takes Seamus Heaney (now deceased) to a church to see a mural by St Omer.  There is also another scene where Walcott's poet friends from all over the world (including Heaney; Jonathan Galassi and Christian Campbell) all go sailing and then each poet recites two of their favorite lines of poetry for the camera.

There is a long tradition of fine documentaries about the great poets of the 20th century. Several have been made about WH Auden, Robert Frost, TS Eliot, Phillip Larkin, WB Yeats, Dylan Thomas, Sylvia Plath. Unlike many of these documentaries, Poetry Is An Island is not a biography or close textual reading: that film is yet to come. Instead, here is a study of Walcott at St Lucia, among his islands and friends. It is a singular achievement, beautiful in its own right and will be an invaluable part of the epic poem of Walcott's own life.

"I don't know what it is, but I am happy: that is as great an emblem anybody could have," Walcott remarks at one point in the film.

when when the documentary air in St. Lucia

There was mention at the Port of Spain premiere that the film will also possibly have a St Lucian premiere in coming months.

My grandmother's 83. I told her about the documentary, and she was funny and remarked, "That old man." Both icons in my life, and both with legacies that outweigh their succeeding generations. Walcott's legacy is language. My grandmother's, a building on Cotton Hill. Legacies define places.

The closing quote in the documentary by Sir Arthur Lewis — A country without the arts is a cultural desert — seemed to me a bit misplaced or another conversation to be had. Perhaps a hint at a series of future Caribbean Arts & Culture documentaries by Ida Does.

And the title for this one, Poetry is an Island is silently powerful. Derek Walcott and Poetry are now synonymous, but begs to ask will St. Lucia be synonymous alongside. The source of Derek Walcott's beautiful language — to which he attributes its Caribbean voice and raw beauty — St. Lucia, does little to pay tribute.

Derek Walcott's poetry will live on, the love for his language is too great. St. Lucia however, home of two Nobel Laureates — Literature and Economics — remains another island of great beauty, lovely hotels.

The film will be screening in Saint Lucia during Nobel Laureate week!