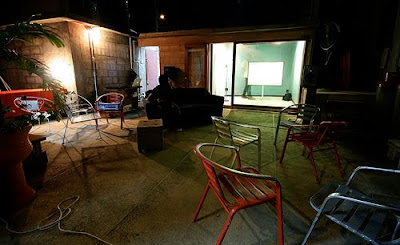 Photo courtesy Georgia Popplewell
In the four years that I've been going to Alice Yard, I've seen Dave Williams dance on stilts inside a room the size of a cupboard; committed larceny as blogger Richard Bolai looked on; had mud and dirt thrown at me in the pouring rain amidst shards of glass; eaten lots of tasty corn-soup; made a cone and painted with wax; watched 3 Canal, 12 the band and many more perform; heard poets, photographers and artists talk about their work; seen installations by Elspeth Duncan, Adam Williams and Nikolai Noel to name a few; been literally shocked by a fridge (it was a lawsuit waiting to happen); consumed hundreds of Stags; sipped hundreds of cups of red wine; encountered one very crazy man; met many many beautiful others.

This week marks the fourth anniversary of the Alice Yard space, which has served as an independent-spirited centre for contemporary art in Trinidad. The contribution of this space, at formal, anecdotal and social levels, cannot be underestimated. It has been a place for the arts, in a country where the arts are all too often left bereft.

Almost every week, thanks to the dedication of a team of instigators, there has always been something going on at Alice Yard. This has been no mean feat. And now, to mark Alice Yard's fourth anniversary, a programme, called 4 x 4, has been drawn up by the instigators.